St Anne’s Loreto Navan was opened in 1953 by the then Minister of Education. Here are some photographs of the official opening. 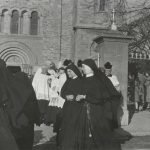 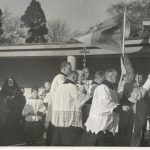 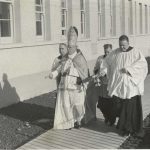 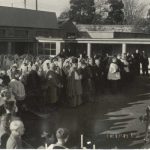 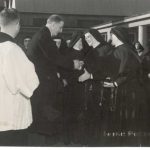 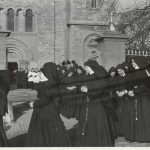 The History of the Loreto Order.

The Sisters known as the Loreto Sisters belong to the Institute of the Blessed Virgin Mary founded in 1609 by Mary Ward, an English Catholic nun. Most Catholics had to seek education in Europe because of religious persecution in England. Mary Ward and her first companions established their first school at St. Omer, in France. In St. Omer, Mary Ward and her group became known as the English Ladies – a title still used for members of the Loreto sisters in many countries in Europe. Despite enormous difficulties, Mary Ward set up houses and schools in Bavaria, Austria and Italy. She moved between the countries mainly on foot. A pair of her rough shoes and her pilgrim’s hat can still be seen in one of the Loreto convents in Altötting in Germany.

Saint Anne was married to St. Joachim and was chosen by God to be the mother of Mary. Their lives were wholly occupied in prayer and good works. All they wanted was a child. When Anne was an aged woman Mary was born, Anne adored Mary and watched her every movement. When Mary left, Anne was left childless in her lone old age. She humbly began to pray again until God called her to unending rest with the Father. Anne’s feast day is the 26th of July. Anne is known as the ‘mother of Mary’.

On July 20th 1833 the Loreto Nuns arrived in Navan to provide the first school for girls in the area. Three years later Mother Paul Finns was appointed superior of the Navan community for life.

She built a new wing to St Anne’s Convent, beside St Mary’s Church, to house the free school of St Anne’s. Soon after the arrival of the nuns in Navan, Fr Eugene O’Reilly applied to the National Board for help in starting a school.

Although surrounded by poverty and deprivation they opened a day and boarding school for all age groups. A cultural and scholastic standard was attained that would measure up to that of the present day. A good deal was due to the breath of vision of the foundress of St Anne’s Mother Paul Finn whose curriculum included religion, Music, Art, English, Latin, French, German, Italian, Arithmetic, Natural Philosophy, Botany and home crafts. These subjects were taken in the intermediate certificate in Navan as far back as 1882.

In 1878 Pope Leo XII sent Monsignor Persio to inquire into the state of religion in Ireland and only to see a fully Catholic School in progress….St Anne’s.

Important dates in the History of our school.

The present national school of St Anne’s was erected in 1853, the section, which is now the hall and the classrooms above.

An extension was built in 1953, the rooms along the top corridor and along the corridor with the staff room.

In 2003, 150 years after the school began, 3 new classrooms were added to the existing building. The Speech and Language Unit in St. Anne’s use one of these.

In May 2013, the building of four new classrooms began to replace the prefabs. In November 4 classes moved into their beautiful new classrooms.

St. Anne’s continues to provide education and since 1998 the school has become co-educational. Secondary Education is provided in Loreto St. Michael’s ensuring a line of continuity in Loreto tradition between the two levels.